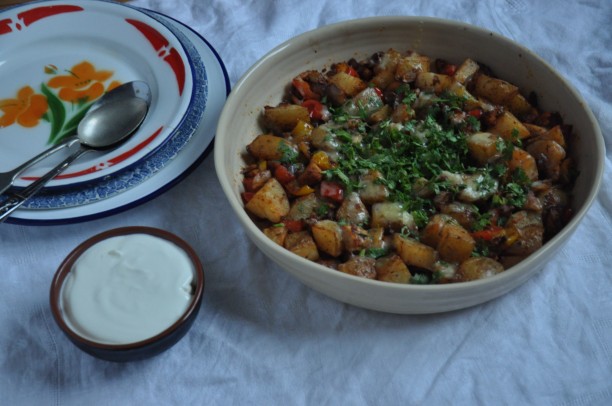 Place the chicken, chopped peppers, onion in a large bowl.

Simmer the potato in boiling salted water for about five to eight minutes.

Drain and leave the potatoes to cool a little.

Toast the coriander seeds in a dry frying pan, after a minute add the cumin seeds and toast for a further minute until it begins to pop. Take care as cumin can burn very easily.

Transfer the toasted seeds to a pestle and mortar or spice grinder and grind until it becomes a sand like texture or finer. Mix with the cinnamon and smoked paprika. Add to the onion, chicken and pepper, pour over the olive oil. Stir to coat. Finally gently stir in the potato chunks. Spread everything onto a large baking tray or two. Place in the oven and roast for 30-40 minutes until the potatoes are golden. Stir half way through.  Scatter with the grated cheese and return to oven until melted. Serve with greek yogurt, guacamole, salsa and wedges of lime.