I love packaging. At Christmas I always keep the boxes that things come in, I have so much tissue paper, wrapping paper and different cartons and crates. I always think that I’ll find a brilliant use for them. I recently acquired two large cardboard boxes. These two boxes would have been the stuff of dreams when I was about eight years old so I knew exactly what to do with them. Make a Play Kitchen! 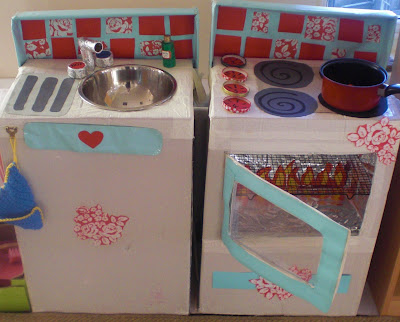 Lots of people have made similar kitchens and they’re a great way to show kids that everything doesn’t have to be plastic, or super expensive. And it shows them how to make something out of nothing.I always try and have something new each week in The Club. The smallies swarmed all over this and were all busy making soup. I took the photos after 3 hours of busy play so it looks a bit bedraggled! 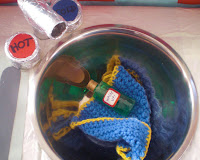 It was very quick and any five year old could easily help.
– I just painted both boxes white.
– Cut out an oven door. Put a sheet of plastic on the door. 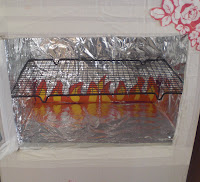 – Used a smaller box lined with tinfoil as the inside of the oven.
– Cut out flames from coloured card.
– Cut out the hob rings and sink from coloured card.
– The tap and handles are a cardboard tube covered in foil
– Cut a circle into the sink unit and snugly fit the metal bowl in
– Paper cut outs for the ‘splashback’
– Jam jar lids are stuck on as the dials, numbers drawn on with marker 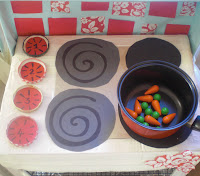 – Crocheted a square (tea towel, wash cloth) with a loop to hang off the side
– I used an empty plastic bottle with water & green food dye as Washing Up Liquid. and GLUED the lid on just in case! 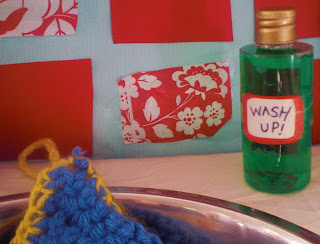 I know what you’re thinking. An electric hob and a gas oven? Really? The truth is I was watching The Godfather 2 whilst I was making this and was totally caught up in poor little Vito Corleones’ journey from Sicily to New York that I wasn’t concentrating properly! He had to stay in quarantine on Ellis Island for three months because he had small pox. And he didn’t even have any packaging to play with, poor child!
Lilly x
This entry was posted in cardboard, craft, Kitchen, Make, Recycle, The Creativity Club, The Godfather 2. Bookmark the permalink.