Posted on March 26, 2010 by Lilly Higgins
I’m very lucky that the boy that makes my heart go boom is as obsessed with food as I am. I remember the very first time we met he impressed me with stories of how he made his own pesto. I think that really dates that story, it’s like a couple in the 1970’s discussing homemade marie rose sauce for their prawn cocktail.
He really does approach the kitchen fearlessly, which did result in the near loss of one of his fingers and somehow getting blood on the ceiling in the process. Anyway he’s always got some project on the go, whether it’s duck confit, quince paste or 40 jars of chutney. There may not be a drop of milk in the house, but hey, we have 10 bottles of Elderflower champagne!
Last weekend he made pork and apple sausages. 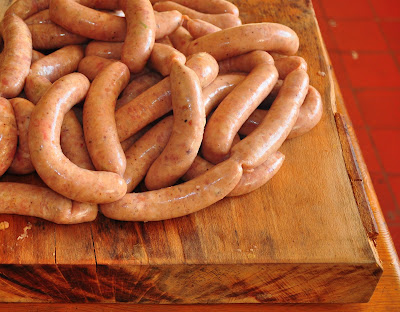 Aren’t they unreal? And he managed to loop them like a butcher does. He used a mincer and sausage stuffing attachment for the Kenwood Chef. He got the sausage casings online and got a load of pork belly and advice from O’Flynns butchers up in the English Market in Cork. O’Flynns make amazing sausages and I always have a few packs in the freezer.
He also made the chopping board that the sausages are on. He made two in beech for my birthday a few years ago. They’re a ton weight but they’re brilliant. I really can never use a plastic chopping board and my least favourite thing is glass. Eeek! The sound of a knife on glass! I love having wooden chopping boards and there’s natural antiseptics in wood too apparently so it’s alot more hygienic than plastic.
My two chopping boards were in nearly every kitchen scene in my brilliant sister Maeve‘s TV show Fancy Vittles. I was so proud each time I saw them! I’m also subtly showing off my burleigh mug in this photo. 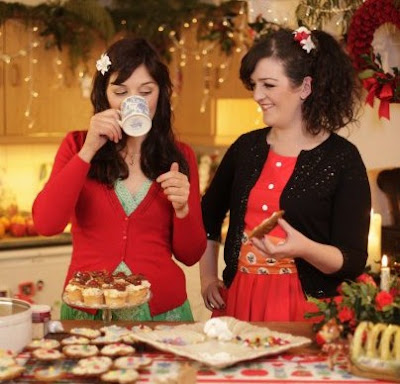 I look like I have a massive hip in this photo but it’s actually a clip on microphone…I swear!

My chopping boards have now retired from the world of showbiz. They did threaten to leave Fancy Vittles and go to The Afternoon Show but settled down once I pointed out that they’d turn out like The Olsen Twins if they let fame get the better of them.

This entry was posted in Bake, love, Make. Bookmark the permalink.

8 Responses to Board silly…