During the week I went to a food blogger event in Dublin held by Bord Bia and organised by the brilliant Donal Skehan of The Good Mood Food Blog. Klara and Maeve from Bord Bia were there making sure everything went perfectly and the week before the event the lovely Klara sent out massive pieces of pork to everyone that was attending the event! I got a huge loin of pork and wasn’t quite sure what to do with it. There really are so many possibilities with pork. But I decided it was such a beautiful cut I didn’t want to mess with it too much!
So I gave it an old school roasting. Just scored the fat, poured a kettle of boiling water over it, patted him dry with kitchen roll and rubbed sea salt into the fat. Then into a scorchio oven of about 230 and turned it down after a while. It took about 2 1/2 hours to roast and I just did a load of roast potatoes with duck fat (I know, I’m terrible.) Then served it with a huge mixed green salad, the garden is really taking off, loads of rocket, lettuce, mustard leaves and mizuna. Peppery lemony salad. Yum. There’s also a load of rhubarb vying for my attention so I had to involve it somehow. So I made rhubarb and onion compote. 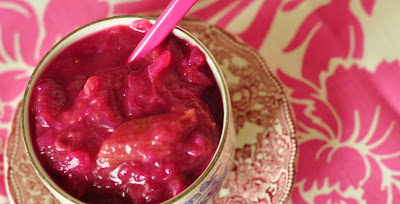 I got this recipe from ‘Nobody Does it better’ by Trish Deseine. It’s a gorgeous book and beautifully styled. The recipes are so simple and straightforward. When I first bought the book a few years ago I thought it was going to be one of those coffee table books that you flick through but don’t cook anything from. But I’ve made lots of her recipes and love them. Only last weekend I made Vanilla Duck, simple, subtle and really nice. Anyway on with the recipe! Trish serves this with veal but I think it was perfect with the roast pork too.
Rhubarb and Red Onion Compote
Or the classier sounding Compote de rhubarbe et oignons rouges.
2 medium red onions, sliced
2-3 stalks pink rhubarb, sliced into chunks
Method:
In a heavy based saucepan heat a little olive oil and add the sliced onions. Cook down very slowly for 5 mins or so. When they start to soften add the rhubarb and a splash of water. Cover the oan and let the compote cook slowly for a further 5-10 mins. Season with sea salt & pepper. Leave to cool. 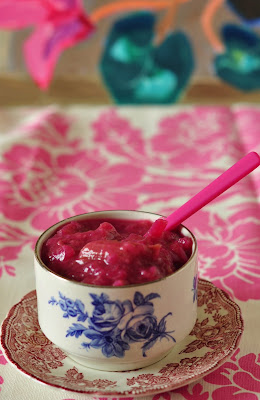 I made this for Sunday lunch last week and am totally obsessed with serving food while it’s hot so I forgot to take a photo until we were pretty much finished! So this photo is not as lovely as it should be. Damn. Reality. 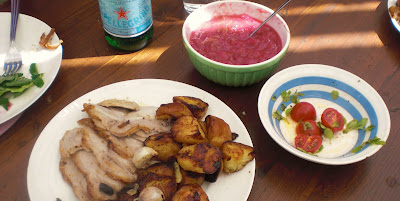 Not by way of an excuse for that photo or anything I had to leave the food blogging event early and missed the talk on food styling and photography. Bibliocook has a brilliant run down of the day though!
Lilly x
This entry was posted in Bake, recipe. Bookmark the permalink.