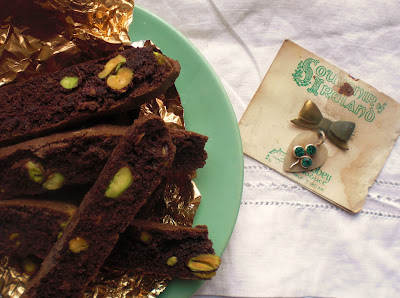 Happy Saint Patricks Day! Yay! I was going to make something traditional but then decided no, I’ll just make something with pistachio nuts. I love pistachios. I decided to make biscotti and thought I had an original idea but it turns out loads of people have made chocolate & pistachio biscotti, never matter. I decided to use Martha Stewart’s recipe here. 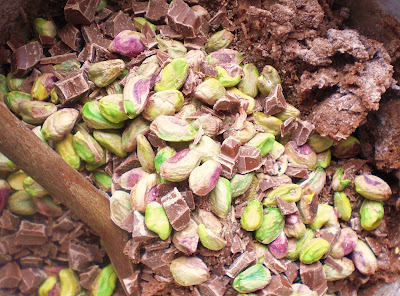 It actually turned out to be pretty messy to make. I’ve made biscotti before and always found it totally grand but this mixture was softer and almost cake like. I would say just flour your hands before you try and shape the log, like you would with soda bread. 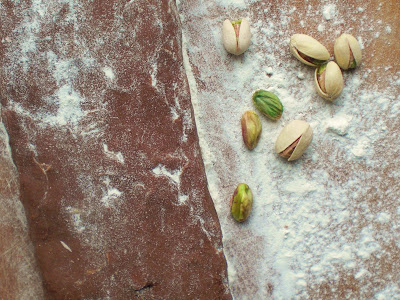 These are softer than normal biscotti. So when you slice them up and put them back in the oven you can bake them for a little longer if you want them crisper. That’s why I did and they were gorgeous. 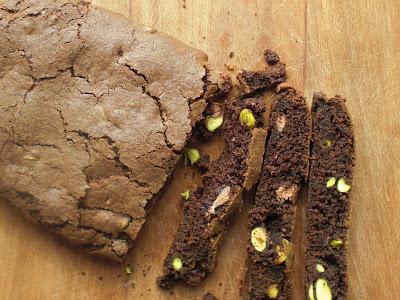 I made such a major mess of the kitchen. But at least it was a chocolaty mess. Biscotti are a great biscuit to have around, they’re great with coffee or crumbled over ice cream. 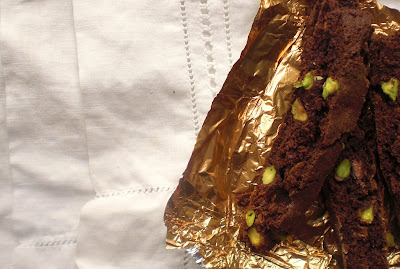 The other thing with this recipe is that it’s all in American measurements. If you don’t have a set of cup measurements then just use a tea cup and weigh it out that way. But keep using the same cup. I could have converted them too but I liked the element of danger: Will they work out? Will they be disastrous? Eeek! So exciting.
Lilly x
This entry was posted in Bake, recipe, Saint Patricks Day. Bookmark the permalink.