First, some exciting News! June is my first month being a columnist! Eeek! I know. My first article is out in Easy Food Magazine (Ireland no.1 food magazine, as they say.). I made a gorgeous crab picnic loaf (below) and next month will be kids cooking. It’s brilliant because I can write whatever I want and do any recipe and get to take the photos too! Dream job! 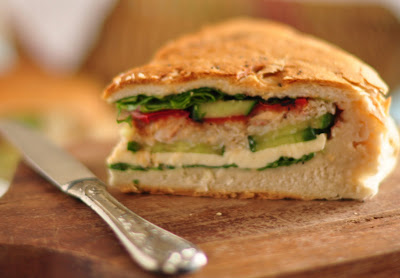 Also me and my sister Maeve will be doing a cooking demonstration at Taste of Dublin next weekend. I’m so excited because I have an AMAZING thing planned and couldn’t even sleep last night because I was so obsessed with planning every detail of it.

Usually when I’m baking I’m thinking of what my post will say. In this instance it was going to be along the lines of: Ate all the butter? No problem! Make a swissroll! Yum! 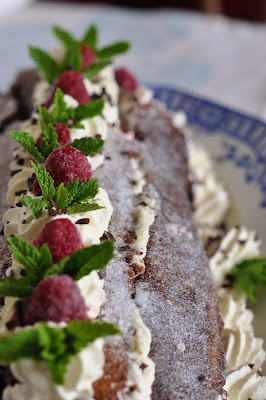 I was going to wax lyrical about how easy and delicious and quick and fun the whole process was but then I decided to take photos. 158 photos. And it all became quite messy. I wanted to do a stop-frame animation showing how the swiss roll rolls and how it gets all tarted up with raspberries. But it just got…complicated. My computer started acting up and I had an over zealous dog helping. 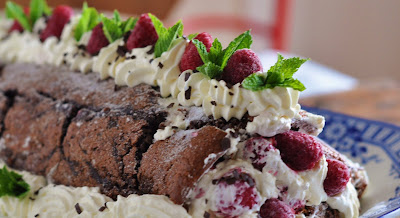 So this post is instead about how some sprigs of mint, two cartons of cream and a load of raspberries can save the day! Woohoo! Throw a load of chocolate chip things over the big swissroll mess and no one will complain! Real life baking always has cream everywhere and a swiss roll that refuses to roll. So I had to just realise that it’s ok if this looks homemade, it is homemade. And it tasted gorgeous too!

I used frozen raspberries, I don’t know what you think of that but personally I’m sick of paying top dollar for berries and arriving home to realise that the bottom layer of berries are furry. Yock! And raspberries are the worst for that so I have no problem buying good quality frozen. 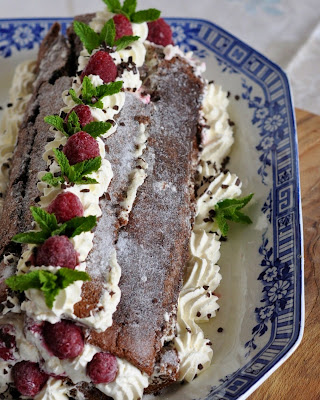 I got the idea for making a cream swissroll from Rebecca, Thanks girl! I had to make it after your brilliant description! As Rebecca said you can jazz this basic cake up no end. I made it for my sister’s birthday and it went down a storm. Having said that I won’t fill a swissroll with cream again because it was so damn messy. Happy Weekend!
Lilly x

This entry was posted in Bake. Bookmark the permalink.