All hail the Queen!

Posted on March 9, 2010 by Lilly Higgins
NOTE: Last Saturday I wrote this post then couldn’t find the recipe anywhere, how frustrating! Then I posted the post by mistake instead of saving it, then the tricksy recipe turned up. Anyway I’m such a goose, some of you have had a sneak preview of todays post. Get ready to feign excitement…
My youngest sister Daisy works part time at The Alternative Bread Company stall in The English Market in Cork. She’s a girl that knows a bloomer from a chleb at 50 paces. She gave me a huge loaf of sour dough recently and it took us a week to get through half of it and I wanted to make something with the rest. So I went recipe hunting! 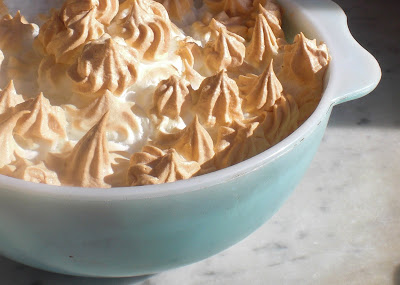 The first thing that grabs me about a recipe is the picture. Does it make me think ‘I need to make this! I need to eat this!’. It usually does. But what about a fusty old book with no photos? Well then I go by the name. This my dears is The Queen of Puddings. Not just The Queens’ best friend ever or the first cousin of the Queen. This is The Queen. So I had to make it to see what she looked like. 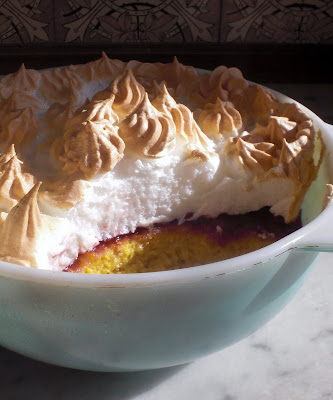 What a fine thing. Sponge bread stuff, jam and Meringue? Oh you spoil me! 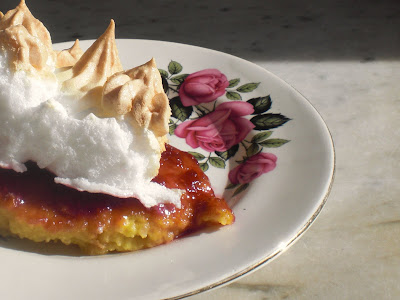 All in all ten people tasted this when I made it and we all had the same reaction: It’s a slow burner. ‘I don’t know if I love it but I can’t stop eating it’ type of thing.
I think I do love it though.
Lilly x

This entry was posted in Bake, bread, recipe, sister. Bookmark the permalink.

3 Responses to All hail the Queen!