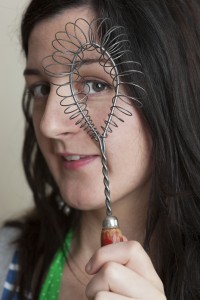 Lilly is a food writer, blogger, photographer and chef. After graduating with an honors degree in Design, Lilly worked in the Art and graphics world but was repeatedly drawn to the kitchen. She finally succumbed to her love of food when she enrolled in Ballymaloe Cookery School in 2007. She then went on to teach at the school.

Lilly started her food blog ‘Stuff I Make, Bake and Love’ in 2010. After a few months blogging she was approached by Gill & Macmillan to publish her first book, Make Bake Love. Her second book ‘Dream Deli’ was published in October 2013.

Lilly is now a weekly columnist & photographer for The Irish Times, with online videos each Friday. She had a weekly column with The Sunday Business Post for three years and a monthly column with Easy food magazine since 2010.  She writes and photographs food regularly for  various national papers, magazines and food producers.

Lilly starred in her sister, Maeve’s, comedy cooking show ‘Fancy Vittles’ and also regularly cooks on RTE afternoon television.  Maeve is a comedian and author with her fantastic book ‘We have a good time don’t we?’ being published in 2012 and her latest book ‘Off you go’ is out now.

With a practical and approachable style of cooking Lilly also has a love of baking beautiful things. Fresh, local produce always feature in her recipes with delicious dishes for feeding a family or for special occasions. Her beautiful photographs and friendly warm style of writing will encourage you to feel confident in the kitchen.

Last Autumn Lilly was a judge on The Great Irish Bake Off 2015 on TV3.